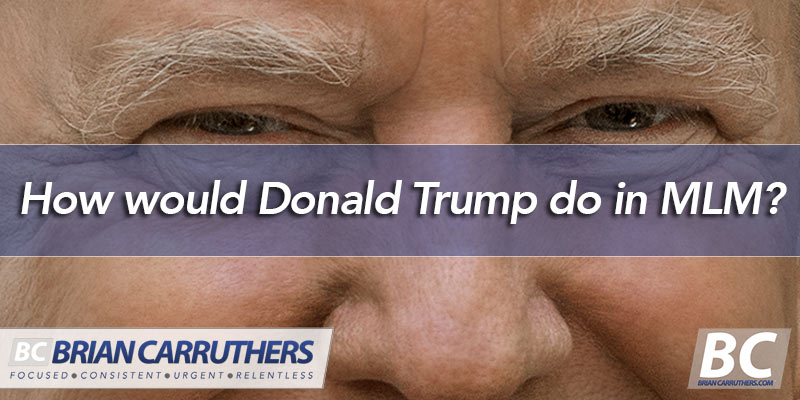 How Would Donald Trump do in MLM?

How do you think Donald Trump would do if he was building a network marketing organization?

FIRST, take your political persuasions out of this lesson, because there’s a lesson here.  If you let your head go into the rabbit hole of politics while reading this because you either LOVE or HATE the current President, then this is indicative of deeper problems you should solve within yourself.  If you cannot have a meaningful discussion to seek value/insights without letting your emotions or feeling get in the way, I have to say that’s not a good look, my friend.  I am one of the least politically-leaning person you’ll ever meet.  I don’t like politics.  And I also don’t like it when people let politics ruin relationships or conversations.  Be respectful.

A team wants to follow a leader they trust. The leader’s integrity is crucial. Does he do what he promises? And, does he do it in an ethical and constructive way while considering unintended consequences?  Doing what you say, but doing damage to others in doing it, is not what people want to see.

Could he stay on track and not go whichever way the wind blows?  If you are the “idea of the week guy” in network marketing, soon people will get fatigued and stop listening to you. People crave stability. They want to know where they’re going, and not be always wondering when another change is going to be sprung on them. You cannot build momentum if you are constantly changing direction, or tweeting controversial stuff at 4 a.m.

A great network marketing leader has leaders who will follow him to the end. Why? Because they trust him and their values are aligned with his. But if many of the leaders President Trump has surrounded himself with during his presidency have been quitting and leaving, there obviously is a lack of alignment and trust. In network marketing, this is the kiss of death.

Network marketing leaders don’t use force and they don’t bully. Their title is earned over time, and their title means nothing to them. They lead by “exampleship” not by title. People follow them because of who they are as a person, not because of the title they wear. Such a leader is respectful and loving, willing to take a stand for something but always careful not to offend. President Trump has some issues here.

One thing Donald Trump did very well, which got him elected, is he effectively created and led a movement that resonated with lots of people (obviously enough to get elected). He recruited millions of people in this way, and he traveled and did tons of rallies which is what a great network marketing leader does. So his front-end tactics worked, but ever since he’s been losing people from his base (his downline). The erosion of morale is what kills a network marketing organization.

My assessment is that Donald Trump would explode of the scene in NWM, build some big momentum in the beginning based on personality, sheer brute force of massive action, and rallying people based on promises to solve all their problems. But after a few years, he would likely lose some key leaders who would tire of the uncontrollable antics and always worrying what crazy shoe is going to drop next … and his team would erode away. Time exposes or promotes everyone. Time would not be kind to Donald Trump.

Let me repeat — This post is not politically driven. It’s just a great way to understand and give an example to what great leadership in network marketing requires. If you want to be a great network marketing leader for the long term, take the good talents Trump has displayed and develop them (like rallying a base) and study the ways he turns off his own leadership and decide NOT to do that to your leaders. Exemplify grace under pressure, a steadfast resolve, be someone people can trust and count on, treat everyone with respect, and always look for the win-win for both sides … Then you can become an iconic leader in network marketing.

If you agree with my assessment, SHARE it on your social media. Maybe we can make our network marketing industry more professional if we all think like this.

Have an amazing holiday season!

My thoughts from Tiger Woods documentary

What the heck are we supposed to do??

How My Mind Works

You are holding your team back