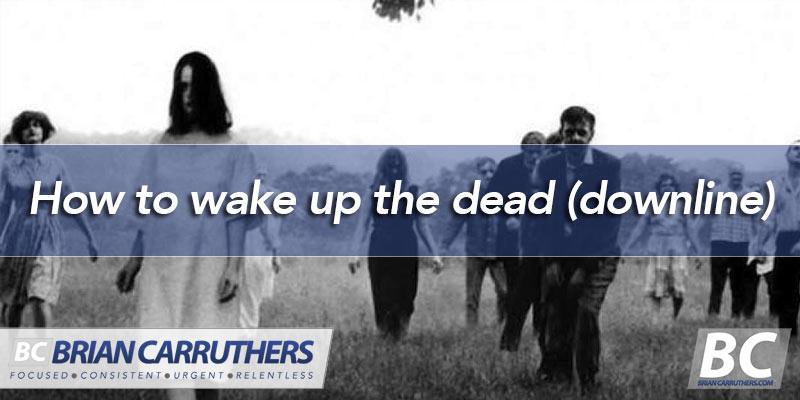 How to wake up the dead (downline)

Have you ever tried to throw an alarm clock into the graveyard of your downline to see if you could wake some people up and get them to start producing?

I have! Many, many times! “It’s easier to give birth than to raise the dead.” In other words, it’s easier to recruit a new person than to get unmotivated people to produce.

Over the years, because I believe fortune is in the follow up… and because I believe that you are never done recruiting someone until they are making six figures from the business… I always follow up with dormant people. You usually don’t know what caused them to lose their focus, or yet when the right timing might be to get their fire lit again for their Why to build the business.

What I have found is when these people hear from someone other than me, a fresh voice, it catches them better than I can. This is because I was always the one they were used to getting calls from, trying to motivate them. A fresh voice, with a new angle, can do the trick far better. So I would ask other leaders to call some of these people for me as a favor, which helped, but that’s not always scalable and possible.

So here’s the solution. I filmed a 5 minute video called “I almost quit, but then” and I talk about how I almost walked away from my network marketing business, but then someone I respected talked to me about my Why and it caused me to evaluate and get back on course… which in turn has led to me making millions and fulfilling every single thing on my Why list. I look into their eyes through the camera and get them to contemplate how this business is the answer to their likely prayers. I am introduced in the video as the best-selling author of three books on money and success, so this adds some influence to my message. This video will wake them up, believe it … I am already hearing back from people who are using it.

Here’s what I would do. Get the Empire Builders Pro APP, and sit down for an hour and text-fire this video out to every team member in your phone. You will be hear notification pings like crazy when they open and start watching the video! After five minutes, start calling them and asking in what ways did that video resonate with them. Be prepared to answer their question of, “Ok, I’m ready to get back to building… what’s my first step?” This will happen often! You are going to bring your team to life!!!

If you don’t yet have the app, go here – www.EmpireBuildersPro.com

TIP: I never give up on anybody on my team. My belief is one day I will catch them at the time when they’ve hit a wall and realize they need to finally build their business. Some of my top builders had all but given up when I loved on them so much (through follow up, and sending them different books/videos/messages) that they finally hit the pedal and started building. Of course I am always looking for new blood, and working with the workers…

Why did I stay with the same MLM company for 21 years?