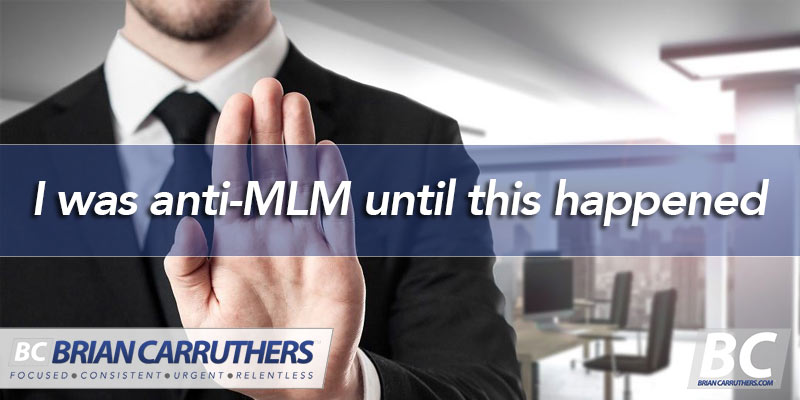 I was anti-MLM until this happened

So many people are sleeping on their opportunity, meaning they signed up to get started in a network marketing business, but petered out and have not been doing anything to build it.  Imagine that.  They liked the product, liked the idea of getting paid for sharing it with others, and likely got big-eyed when they saw how much they could earn if the people they shared it with in turn shared it with others.  The brilliance of the flow of compensation is hard to not see, unless like me you were blind to it.

I was 24 years old, and already working in my family real estate company.  I was rookie of the year for my county, and my second year at age 23 I had earned $70K.  For a young guy that was pretty awesome.  I felt darn confident and had swag in my step.  A friend from Villanova I went to college with contacted me about a side business he was getting involved in and thought I would have interest.  But I shut him down, telling him those “things” are a waste of time and that I have a family business I plan to elevate within.

Most people would leave the person alone at that point, but not my man Edwin.  He insisted that I meet with his friend from Villanova.  Turns out his friend played football, tried out for two NFL teams but didn’t make it, went into social work in downtown Philly making $20K a year and driving a used car.  THIS is who he wanted me to meet with.  My ego couldn’t waste time hearing from this person about making money, but neither did logic.  Well, I met with them.  The guy pulls up in a new Mercedes convertible next to my used Ford Explorer I bought from my dad.  We went into the TGI Fridays and he laid out how the MLM business works, and I saw the power of leveraged income in such a new way.  I saw a real person, my age from my same school, who was making great money at it.  I was hooked.

This story shows the power of using third party to talk to your prospects FOR you.  Edwin could never have recruited me.  He didn’t have “the story” and the new Mercedes.  Now I spent a few years in this particular company and did not make much money.  But I DID learn a hell of a lot.  So when my current opportunity came along, I was VERY aware of the philosophies, mindsets, and how to’s for building such business.  And this is where I hit my grand slam and made tens of millions.  My life changed forever.

So I want to make a point.  I got SOLD on this network marketing business model and I treated it like a real business decision and I committed to see it through to success.  If others were living the life I want, gosh darn it I can too, and I WILL. I plodded forward every day, some days spent more time than others on it.  But every day I gave effort.  So many people admit their JOB will never provide them the life they REALLY want, and the agree that their MLM business has the potential to give them everything they want … yet, they let it sit idle.  It makes no logical sense. But people aren’t usually logical, they are emotional.  In the near future, I am going to do a training webinar on the emotional quandary that holds people back, and why this happens. And I will offer suggestions on how to help yourself break through it if you are personally stuck, as well as how to attempt to help others break through their paralysis.

In the meantime, go watch my new YouTube video called “Shock Them by Building an Empire”  https://youtu.be/45mq_r-mr7g

Listen, I mean REALLY LISTEN, to the words.  Watch it once, then start again but this time look away and only listen tot the words.  If you agree with the message, then you know MLM is the right vehicle for you, the ONLY one for you.  If not, then move on.

The Downside of Network Marketing

I felt stuck and it was making me DEPRESSED

I Will Never Leave You

Our EXAMPLESHIP creates our legacy