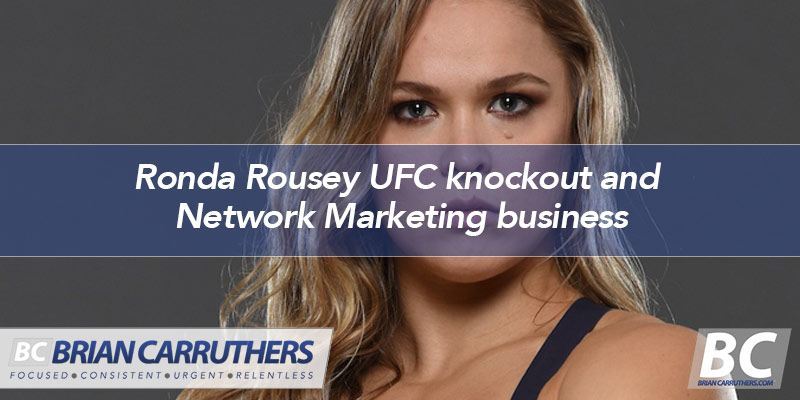 I must say I have seen this posted a lot on Social Media since the Ronda Rousey UFC fight last night:

People saying they don’t feel bad for Ronda Rousey getting knocked out because she made $3M in less than a minute. THIS IS NOT TRUE. She worked on herself, worked on her craft and practiced for many years, all leading her to this “pay day.” The public sees the pay day and say “Man, I would go in the ring for 48 seconds for $3M!” No, you wouldn’t spend the 5-10 years becoming worthy of a title fight first!

It’s a matter of missing perspective. Anyone who accomplishes big things, and get big payoffs, earns it long before. You see the spotlight moments on the stage but you don’t see the 10,000 hours of work behind them.

Yes, it’s now on the floor.

Ok, picking the mic back up … we need to all realize that nothing worthwhile (including big pay days) will come without hard work, focus, determination, and saying NO to distractions.  We have to work on ourselves constantly, growing and becoming better.  Ronda proved for years she has the skills to win.  She lost the mental edge recently, as she started to appear in movies and ads.

Going into the new year 2017, I hope you will find or keep sharpening your edge.  Dive deeper into becoming a better you.  Read, study under strong mentors, be accountable, and commit to giving it your everything.

Be Obsessed or Be Average!

PS – If you plan on investing in personal development or training in 2017, buy those things NOW, today, so you can write the expenses off in 2016 taxes rather than waiting a whole additional year!  Grab something you don’t yet have (books or trainings) at www.briancarruthers.com/shop (for today, $200 OFF the Locker Room Training with code LRT200)

Our EXAMPLESHIP creates our legacy

Put your WHY in the Sky

This is what I told my team yesterday

THE #1 Thing that Makes or Breaks Network Marketers