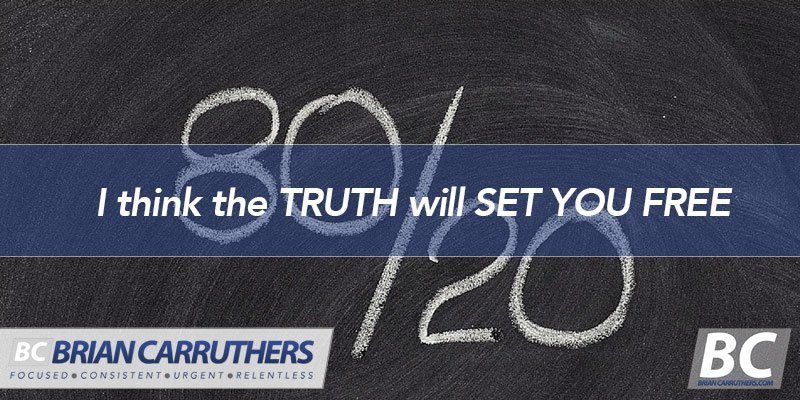 I think the TRUTH will SET YOU FREE

25 Shares
When I started in network marketing, I thought everyone would want to sign up. I was wrong. But there is not a single product in the world that everyone buys. There isn’t even one religion everyone agrees on and believes in.
But of course when someone pays their money to start their business as a rep/distributor, they will surely go do what it takes to sign people up and start making money. Nope. 80% do nothing. And about one in 50 will actually be a player who takes it far. Does this excite you? Not likely. I was so frustrated with all those people I recruited who did not follow through on their decision. I was kind of freaked out. Why would they pay money and then not even do squat? Asking that question is like asking why do people drink and drive? Or why do millions of people smoke. Or why do people not save more money? Or why do people cheat? People are just interesting creatures! I had to learn to discipline the disappointments. I just had to learn what the rations are, so that I know what to expect. That’s all I needed. If I expect 100% of my recruits to produce, that will surely cause me to get depressed when the inevitable happens. But if you tell me 1 out of 50 will take it seriously, I can just calibrate my expectations and know that I need more people quitting to get to the stud. And 3-4 studs and I’m home free. Hey, I just need to know this truth, and now get out of my way, I am going to go on a recruit spree to find 50 asap, so I can find a stud to lock in with. (And I don’t need to recruit those 50 myself, I can also find them THROUGH networking / tap rooting through my team members!) Of course I work with everyone out of the gate ASSUMING the best and working with them with urgency … assuming they will be the stud until they prove me wrong.
The truth is important. I feel it’s liberating. I know what I need to do, and I know it will be worth it when I do. Someone else not following through on their decision cannot be allowed to mess up my mojo. They can let their dreams die, but no way am I letting that steal mine!
Go through the numbers and let nature take its course.
How did I get this necessary mindset?  Read my book, or listen to the new audiobook  www.BuildingAnEmpireAudio.com  – I lay it all out.  You need to craft these philosophies for yourself before you can get where you’re looking to go.
See you at the top!

I Will Never Leave You

You have 20 seconds before your prospects decide

Try this to convert some recruits

Replay of the Recruiting Coaching webinar